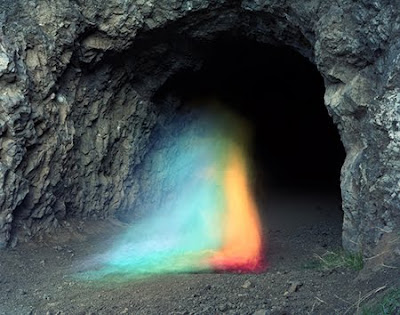 The Bronson Caves are located in Los Angeles' Griffith Park and are famous as a stage set to countless moition pictures and television shows. The caves are actually man made and were originally a rock quarry during the early 1900s used to lay streets for an expanding Los Angeles. A hundred years of filmmaking has occurred at the caves imaging events from explosions and gun fights to the discovery of cave paintings. Reflecting on this history, the caves are documented on various formats and film stocks over time as an unchanging landscape amidst a chaotic specter of fictional realities.

In the series of photographs titled Bronson Caves, the caves served as a stage set yet again. I performed actions for the camera with massive sheets of colored paper. Since a long-exposure photograph was produced rather than a motion picture, the papers were recorded as voluminous, glowing colors. The materiality of the rainbowed forms, emerging from the mouth of the cave, dancing about the canyon, and bubbling up from the ground, are based solely in the photographic process, and can only be experienced when viewing the final photographic prints. If a visitor to the caves were to accidently stumble upon my performance they would only see a mass of crumbled colored paper draped awkwardly over a man moving/dancing to a camera positioned on a tripod. The goal of these performances was to create sculptural, photographic objects that interacted with the history and architecture of the caves.

The colored paper used during the production of the cave photographs was transformed, weathered, stained, and torn after months of constant use. Deciding to isolate the medium, the props of the action, a studio setting with a pedestal was used to photograph the various scraps of paper. The format of these photographs mimics the traditional way of documenting art objects. However, a photographic technique similar to that explored at the caves was used, exposing the paper into a blurred mass, a pure photographic object. The final phase of the series involved setting the paper ablaze, letting the objects pass in transience but allowing them to persist in photographs.